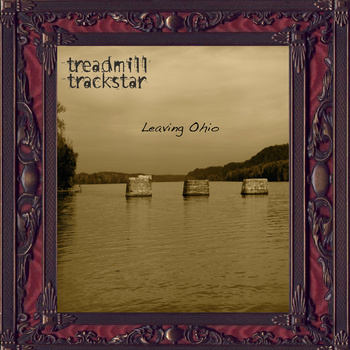 A self-described “nonprofit band” (aren’t they all, really?), Treadmill Trackstar‘s second act (the band’s roots stretch back to the late 1980’s and they released an album in 1997 on an Atlantic Records subsidiary) is proving to be more fruitful than the first, from both a creative and numerical standpoint. Leaving Ohio is the band’s second album in as many years and they are already working on a third even as this one sees its official release this week. All of these recordings have been financed through fan donations, Kickstarter campaigns, and other creative financing options, allowing Treadmill to proceed at their own pace, a luxury that’s paying off in its best work to date.

If I Belong To Me was a focused return to rock ‘n’ roll form, then this latest effort is the more thoughtful morning after. Recorded almost entirely with acoustic instruments, it is noticeably more mellow but no less densely arranged. Instead of walls of guitars and drum tracks, the space is filled with violin, castanets, acoustic guitars, and the group’s signature cello. This video of the song “Waste” is a great example of the band’s acoustic direction this time out:


A thematic album of sorts that deals with a man trying to get on with life after his long time mate drowns in the Ohio River, there are multiple songs dealing with loss, such as the line in “Cardinal S,” “Sorry kids we never had, your dad and mom are gone.” it’s that kind of perspective that Treadmill’s key instigator, singer-guitarist Angelo Gianni, brings to even the most straightforward stories–thinking always of the possibilities and expanding upon them in ways the average writer wouldn’t even think to.

The most unusual track here has to be “Knives in the Kitchen,” which is like an Edgar Allen Poe poem with a punchline, or ‘gotcha’ moment at the end. Creepy-sounding and totally different than anything Gianni or Treadmill have ever done before, it’s the album’s most arresting yet anachronistic moment, as if “The Telltale Heart” had been set in the backwoods of Alabama.

The acoustic framework suits these songs, perhaps that was one reason Gianni and company went that route; several songs do still retain vestiges of the more insistent rock found on the band’s previous work, however. “Lions in the Woods”, for example, could have easily come out in a crushingly electric version, as the acoustic take included here is fairly intense already.

The title track that closes the album is another different-sounding tune for Treadmill, as it is mostly just Gianni and a piano (think Ben Folds and “Brick”, also an unusual tune for him at the time it was released). It’s a closing in more ways than one, with the theme of loss and leaving reaching its natural conclusion as the character finally resigns himself to departure from all he’s known with both regret and hope. The lyrics are powerful, the best Gianni’s ever written, so I’ll reprint them below. (At the band’s official website you can find the lyrics to all of the new songs)

Dan Cook (Verna Cannon, Lay Quiet Awhile) and Susan Cramer (SC Philharmonic) lent their talents on violin and Mako Fujji recorded some didgeridoo for the record in Fukuoka, Japan. (Angelo performed with Mako while doing a few solo gigs in Japan in 2010.)